EAST FREEDOM — Every seat in the East Freedom Fire Hall was filled Saturday morning by hunters, about 300 of them, hanging on every word spoken by a scientist who promised a long-awaited cure for chronic wasting disease. 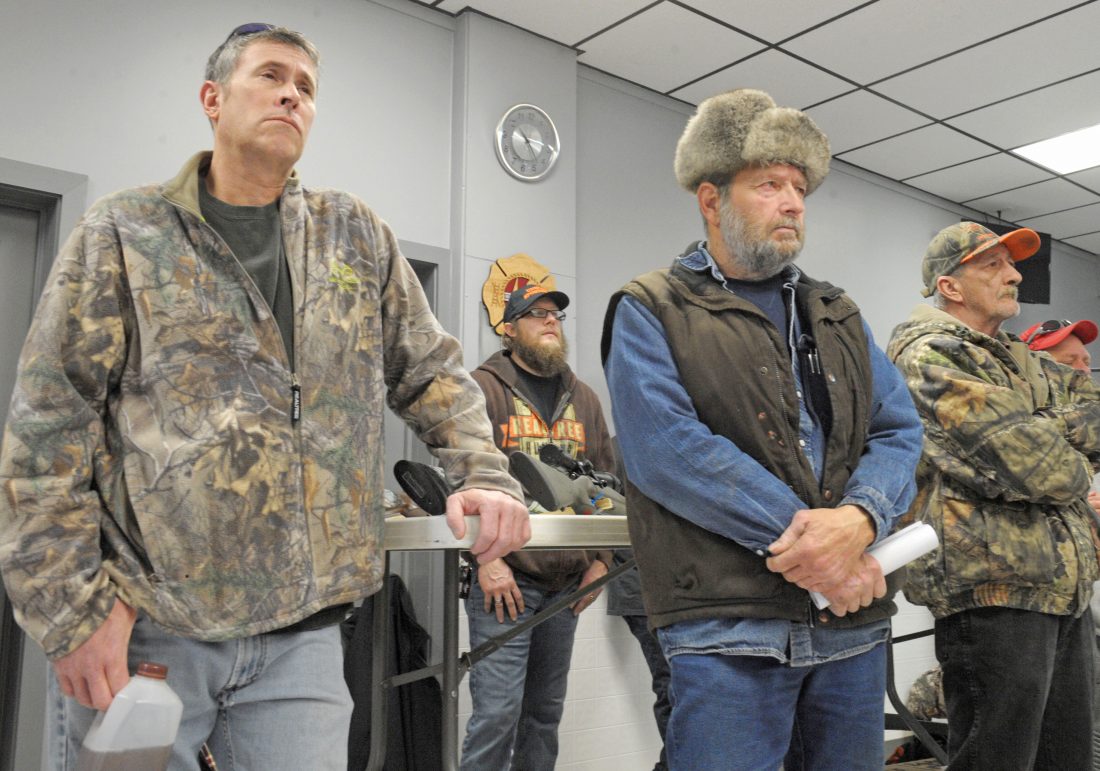 The chronic wasting disease vaccine that ecologist and biologist John Eveland spoke of seemed so close but still far off — at least five years and a few thousand to a million dollars away.

“We are facing a biological and human health catastrophe,” Eveland said.

Several years ago, Eveland was asked by a former governor and the Pennsylvania State Legislature’s Game and Fisheries Committee to conduct a comprehensive assessment of the Pennsylvania Game Commission’s deer management program.

He is critical of the game commission’s latest methods, namely, targeted removal of deer.

Eveland was the scientist who decades ago developed a vaccine for the brain worm that was killing Pennsyvlania’s elk herd. Now he is working closely with the grassroots sportsmen group, Unified Sportsmen of Pennsylvania, on CWD.

With recent conflict between Blair County hunters and the Pennsylvania Game Commission on how to slow the disease, members of the sportsmen group visited Blair County and brought Eveland with them.

State and federal government officials also showed up in the hunters’ corner as they strive to save their deer population and hunting tradition.

Congressmen Glenn “GT” Thompson, R-15th District, and John Joyce, R-13th District, addressed the crowd to announce they plan to introduce legislation next week that would authorize up to $15 million starting in 2020 for priorities including vaccines for CWD.

For 40 years, chronic wasting disease has been a disease without a solution.

Recently, local hunters and landowners organized to deny the Pennsylvania Game Commission from carrying out a targeted removal of potentially 2,000 deer in Blair County for a pilot study to determine whether lower deer herd numbers would slow the spread of the disease.

Private landowners refused to allow the game commission’s USDA sharpshooters on their land to conduct targeted removals of deer at night, and the final blow to the plan came when Pennsylvania Rep. Jim Gregory took his constituents’ voices to the commission, along with Sen. Judy Ward, R-Blair, and Rep. Jesse Topper, R-Bedford.

Gregory sat among the hunters Saturday.

While the game commission supports arguments from other states that targeted removals can be effective in maintaining CWD, there is no guarantee.

“The game commission cannot just ‘think’ they know what the solution is,” Gregory said. “The people in this room want to have confidence in the science.”

Joyce and Thompson stated their support for the hunters in their Congressional districts, many of them wearing “Save the Herd” T-shirts Saturday morning.

“All politics are local,” Joyce said, commending the hunters for stopping the commission’s plan to reduce deer.

“The study was to be conducted with sharpshooters using night scopes rather than microscopes. We know that we have to turn this over to science,” he said.

Thompson talked about the federal funding he and Joyce plan to make available for research.

“Too often we push out policy before science,” Thompson said. “I think that’s what we’ve done here in Pennsylvania with chronic wasting disease. We need to give science a chance to catch up. No matter what problem we face as a nation, it should be faced with science and data not myth.”

Toward that end, he and Joyce will propose $15 million to be made available for the Department of Agriculture, institutions of higher learning and independent research centers.

The recent agreement between the Unified Sportsmen of Pennsylvania and Lousiana State University researcher Dr. Frank Bastian gave hunters hope for a cure.

Eveland said Bastian has identified a bacteria that causes the disease, debunking the mainstream theory that a malformed protein is the cause. Confident that Bastian is correct, Eveland said, an antibiotic can be developed.

“It really doesn’t matter what causes it — the point is, the disease is winning the war,” Eveland said.

Eveland is on Bastian’s team of scientists who plan to field test the vaccine in Pennsylvania before it is used nationwide.

The implications go beyond chronic wasting disease. Bastion’s work could provide vaccines for all types of prion diseases including the human variant, Creutzfeldt-Jakob disease.

Sportsmen across the state are soliciting donations to support Bastian’s research.

“There are three things we are looking at. First, in about 12 to 18 months, we plan to have a diagnostic test kit developed for hunters to use,” he said. The next step would be an injectable vaccine for deer farms. The final step would be to adapt the vaccine for an oral consumption by deer in the wild.

But there is a glitch, Eveland said.

“The glitch is that we are looking at four to five years until we get the vaccine it into the field so it becomes effective. By that time, disease will be so embedded. It may already be devastating to elk and deer,” he said.

However, proposed legislation from state Rep. David Maloney, R-Berks, would buy time, he said. Maloney’s bill would apply remedial measures to keep deer populations up in the four to five years that it will take Eveland and Bastian to get a vaccine tested and into the field.

Hunters went away knowing there is a lot to be accomplished in the state and federal governments to “save the herd.”

“We need the support of the government to get these bills passed.”