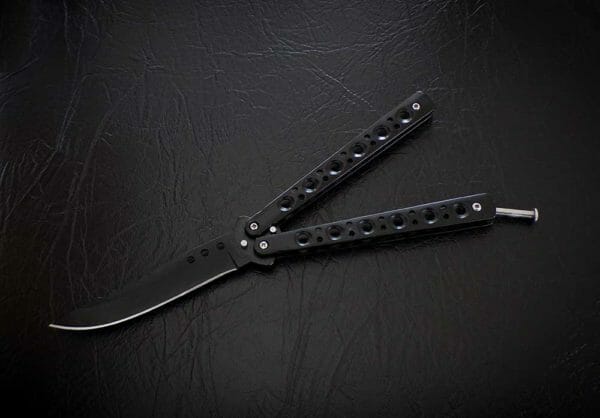 The opinion holds that even if butterfly or “balisong” knives are protected by the Second Amendment of the Constitution, a state law banning any possession, manufacture or transport of such knives is constitutionally valid.

The opinion holds that even if butterfly or “balisong” knives are protected by the Second Amendment of the Constitution, a state law banning any possession, manufacture or transport of such knives is constitutionally valid. From the opinion:

The popularity of an all-encompassing class of weapon (the knife, or even the folding knife)is immaterial when only one narrow subset of the class (the butterfly knife) is banned here.The Court declines to treat the ban on butterfly knives—a relatively obscure weapon—the same way the Heller Court viewed the ban on handguns—the “quintessential”self-defense weapon. Doing so would neglect the Supreme Court’s emphasis on the regulated weapon at issue—and by extension much of the Court’s reasoning that led to its ultimate holding. This case simply does not amount to the same level of “destruction of the [Second Amendment] right” as Heller.

The plaintiffs are appealing the decision to the Ninth Circuit Court of appeals.

The Supreme Court has been deadlocked and unable or unwilling to protect the exercise of those rights. Without the election of Donald Trump and the appointment of Justices Gorsuch and Kavanaugh, the Second Amendment would be dead letter law across the United States. Instead, federal appeals courts in circuits hostile to the Second Amendment have been using the lack of SCOTUS action to slice away most meaningful Second Amendment protections in several Circuits, notably the Ninth and the Second Circuits.

The first salami slice is the claim that Heller is a very narrow decision, only protecting the defense of self and others in the home with commonly available handguns.

This is the core of the argument used in the Hawai'i District Court opinion.

In this extreme view, handguns in the home are the only “core” of what is protected by Second Amendment rights.

The particular Hawaii law only bans a particular type of knife. The Court's opinion in Teter v. Connors is the law is Constitutional because it does not ban all knives. Heller rejected this viewpoint with Caetano, unanimously clarifying the Second Amendment applies to all bearable arms.

With the “salami” approach to the Second Amendment, laws banning all magazines which hold more than one round of ammunition, all ammunition of greater power than a .22 short, and all knives except for butter knives, could be banned, bit by bit, and pass Constitutional muster.

Laws that forbid the carry of weapons outside the home would be Constitutional.

Laws banning carry outside the home are already in effect in New York City and Hawaii.

It is absurd. It shows the arrogance of the District Court, and its belief the Supreme Court will do nothing to prevent a wholesale ban of most weapons in most circumstances, as long as it is done salami slice by salami slice.

The District Court mentioned the Caetano decision, which makes clear knives are protected by the Second Amendment. The Hawai'i opinion defines the protection of the Second Amendment as so close to zero, in its view, as to be effectively meaningless.

The logic, as such, is this: even though butterfly knives are covered by the Second Amendment, they are not part of the “core” right: therefore they may be banned by the state.

The opinion in Teter, from Hawai'i, cites N.Y.S.R.P.A. no less than nine times.

For those unfamiliar with the “scrutiny” framework, strict scrutiny means the court can deny the exercise of the right in only the most extreme circumstances. For example, the exercise of Second Amendment rights can be denied to a prisoner.

The lowest level of scrutiny is rational basis. Almost all laws pass this level. At this level, the plaintiff, not the government, must prove the law is not related to any rational objective in any way. It is an almost impossible burden.

An important government interest is safety. Safety has become a catchall reason in any Second Amendment case. No court has required the government to show whether safety is actually improved with a law infringing on the Second Amendment. As for whether the law is substantially related to achieving the objective of greater safety, the court simply takes the government's word for it.

For infringements on the Second Amendment, no proof has been required. In the Hawai'i case, the government did not show a single crime where a butterfly knife was used.

The opinion cites several appellate court cases to justify its definition of intermediate scrutiny as no more than a different name for rational basis.

If intermediate scrutiny were to have any actual “bite” in this case, the government would have to prove banning butterfly knives, while leaving the vast majority of knives unregulated, would have an actual effect on crime. The opinion does not require proof. It assumes the government knows best.

If these definitions are accepted as the correct way to determine what level of regulation is permissible under the Second Amendment, it is difficult to imagine what arms are forbidden for the government to ban. Perhaps we would be allowed five shot .22 revolvers, which would be required to be unloaded and locked up, separate from any ammunition, when not actually carried on our person, in our home.

These arguments make the Second Amendment dead letter law, by reducing the limits on government power to irrelevant and minuscule restrictions, which have little practical effect.

It is the long-running dispute between two philosophical views of the Constitution.

Originalists and textualists insist words mean things. The Constitution may only be altered by the amendment process.

Progressives state the Constitution is “living document”, the meaning of which is whatever a set of judges wants it to mean, at any given time. Words mean whatever they wish them to mean. In the view of Progressives, the Constitution is an impediment to government power, which can easily be “worked around” with sufficient legislative wordsmithing.

The corrosive effect of the Supreme Court refusing to correct the obvious error by the lower courts is well illustrated by the opinion in Teter v. Connors, citing of the N.Y.S.R.P.A. case. All parties understood N.Y.S.R.P.A. was a terrible decision, obviously violating Second Amendment protections.

By refusing to hear the case after the City and State went to great lengths to make it moot, the case is now being cited to restrict and degrade Second Amendment rights in the Ninth Circuit case in Hawaii.

The appellate courts showing open hostility to the Second Amendment must be corrected. Teter v. Connors may be a way for the court to correct them. The case involves knives, not guns. The court was willing to hear Caetano, which was about electric stun guns, not firearms.

It is possible a three-judge panel on the Ninth Circuit will reverse Teter.

If the Senate is flipped to Democrat, the court will likely be packed with six more Progressive judges to bring the total to 15 justices. Both the Second Amendment, the First Amendment, and the electoral college will be effectively destroyed.

Unfortunately, our liberties rest on the outcome of the 2020 election.

This is what happens when a philosophy hostile to the idea of limited government has been taught in the schools for three generations.

Dean Weingarten has been a peace officer, a military officer, was on the University of Wisconsin Pistol Team for four years, and was first certified to teach firearms safety in 1973. He taught the Arizona concealed carry course for fifteen years until the goal of Constitutional Carry was attained. He has degrees in meteorology and mining engineering, and retired from the Department of Defense after a 30 year career in Army Research, Development, Testing, and Evaluation.