The annual Rally to Protect Your Right to Keep and Bear Arms at the Pennsylvania Capitol that had been postponed in June has been rescheduled for Sept. 29. 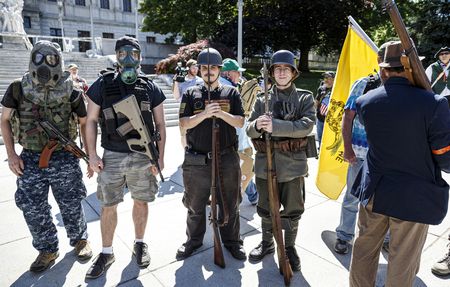 Rep. Daryl Metcalfe, R-Butler County, announced on Wednesday that the rally will begin that day at 11 a.m. on the front steps of the Capitol and carry the theme, “Stand Your Ground Against Socialism.”

In announcing the new date for the rally that in the past has drawn a few thousand attendees, Metcalfe said the theme grows out of what he calls “Gov. Tom Wolf’s tyrannical abuse of emergency powers” during the COVID-19 pandemic. Metcalfe last month introduced a resolution to impeach the governor.

“It is precisely the Second Amendment and our right to keep and bear arms which provides the foundation and reinforcement of all the rights recognized and proclaimed in our state and federal constitutions,” said Metcalfe in a news release. “This especially includes, Article 1, Section 21 of the Pennsylvania Constitution which clearly states: ‘The right of the citizens to bear arms in defense of themselves and the State shall not be questioned.’”

Among the legislative priorities that will be championed at the rally are House Bill 1747, which repeals laws that allow the governor to suspend or limit the sale of firearms as well as bans the right to open carry during a disaster emergency declaration. The measure passed the House 127-74 with some bi-partisan support and is now in the Senate awaiting consideration.

However, during the current emergency declaration, Wolf has not imposed restrictions on the sale of firearms or open carry permits. In fact, the state police report a surge in the number of firearm background checks they are performing.

In his news release, Metcalfe said the governor’s “blatant, unconstitutional misbehavior in office and callous disregard for the most fundamental civil liberties of your fellow man” forms the basis for the rally’s theme.

In speaking directly to Wolf in the news release, Metcalfe said, “You have no authority to imprison any citizen in their home or otherwise rob them of their right to put food on the table. Our right to arm and defend ourselves and our loved ones is non-negotiable, and you can expect us to vigilantly defend these inherent rights on the state Capitol steps on Tuesday, Sept. 29.”

Wolf spokeswoman Lyndsay Kensinger responded to Metcalfe’s statement, saying, “The governor worked with Pennsylvania State Police and local law enforcement to ensure that the opioid and COVID-19-related disaster declarations did not affect citizens’ firearms rights. In fact, the administration has extended the license to carry firearm permit expiration dates three times because COVID-19 mitigation efforts prompted the closure of some county courthouses and sheriff’s offices, which are responsible for permit renewals.”

She added: “This is another example of the Republicans lying about the administration’s mitigation efforts to battle the pandemic. We need the Republicans to stop spreading misinformation to the general public, and we badly need them to be more responsible and more responsive to the health and wellbeing of all Pennsylvanians.”

Metcalfe cancelled the gun rights rally in June over safety concerns arising from a Facebook promotion of a competing event over the police custody death of George Floyd scheduled to happen in Harrisburg at the same time.

In a statement issued about that rally’s postponement, Metcalfe said the decision was made “in the best interest of the rally’s attendees, speakers and our men and women in blue who protect and serve.”

Despite the rally’s cancellation, roughly a hundred people showed up on the Capitol steps anyway not only in support of their Second Amendment rights, but was also an expression of their rights to free speech and to assemble.

For the upcoming rally, Metcalfe encouraged those attending to stay alert and to practice social distancing according to the Centers for Disease Control guidelines.

* This post was updated to add a further statement from the governor’s spokeswoman.