Title: In firearms and other dangerous articles, further providing for persons not to possess, use, manufacture, control, sell or transfer firearms.

Description: In firearms and other dangerous articles, further providing for persons not to possess, use, manufacture, control, sell or transfer firearms. ...

Pennsylvania House Judiciary Committee Chairman Rob Kauffman’s declaration Tuesday that he will not take up a bill aimed at giving people a new way to get guns out of the hands of suicidal or judgement-impaired persons had two early effects at the state Capitol:

“We see those as fighting words, not a final declaration,” Shira Goodman, executive director of Ceasefire PA, one of the state’s leading gun control advocacy groups, said about the Franklin County Republican’s declaration. “If that means we’ve got to battle in the Senate or try discharge petitions or try to amend other bills that are moving (to get an extreme risk order bill considered), we’re going to do it." 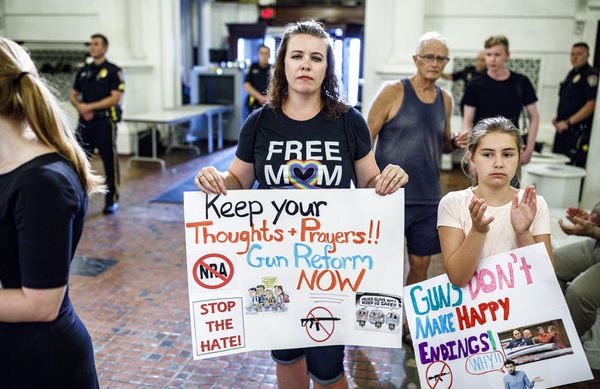 Leanna Goodrich and daughter Tessa, of Landsdale, Pa. hold signs at an Aug. 7, 2019 rally at the state Capitol calling on federal and state lawmakers to pass proposed gun safety legislation.

If those actions don’t bear fruit, Goodman added, “2020 is an election year, and we’re going to make sure that everybody who can vote knows about this.”

The red flag bill Kauffman promised Tuesday to block had been seen by some as the next great patch of common ground for advancement of gun laws.

Some form of extreme risk protection orders now exist in 17 states, including 12 that have passed them since the February 2018 mass shooting at Marjory Stoneman Douglas High School in Parkland, Florida.

The bills are designed to provide a way for quick, court-ordered intervention – including the seizure of guns – for persons thought by family members or law enforcement to have reached point where there are legitimate concerns that they are a threat to themselves or others.

Bills under consideration here would set up a procedure similar to emergency protection from abuse orders in domestic violence cases, that would permit, with cause, short-term seizure of guns pending a court hearing at which the subject of the petition would be able to represent him or herself.

If, after the full hearing, the judge finds “clear and convincing evidence” that a threat exists, the court could order a final extreme risk order that would last up to one year, with options to extend where warranted. The respondent would not be able to have his or her guns, or buy new ones during that time.

Advocates for gun owners rights say they agree with focusing on people who could be a danger, but they have massive problems with the creation of a new court-sanctioned process that could lead to gun confiscation – in many cases without any advance notice to the gun owner until the order is being served.

They said this week that they believe all sides would be better served by making more efficient use of other existing procedures, like involuntary mental health commitments.

“Confiscating guns is not doing anything to actually help the person at issue,” said Leon Baker, a state board member for Firearms Owners Against Crime. Existing involuntary commitments, he noted, connect the person in question directly to the mental health system, and following a commitment he or she would have to petition the courts for the return of their guns, or removal from do-not-sell-to lists in the gun background check systems.

The stand-off intensified this week when, after taking action on a series of bills that are mostly tough-on-crime or double down on existing law giving the state supremacy in writing gun laws in Pennsylvania, Kauffman said his panel is done with gun issues in the 2019-20 legislative session.

“We don’t have any intention of addressing further gun control measures this session," Kauffman said.

Elaborating later Tuesday, he said, “if the Senate sends us some good legislation we could consider it. But I wouldn’t anticipate red flag being part of that.”

Kauffman’s word is not final, but it would be very difficult for legislation on guns — even bills that have passed the state Senate — to get final passage votes in the House if the chairman there refuses to bring them up.

Kauffman’s counterpart in the Senate, Sen. Lisa Baker, R-Luzerne County, was less declarative on the subject this week. After two days of hearings Baker said Wednesday she isn’t making any commitments about calling for a vote in the Senate Judiciary Committee would vote on its version of an extreme risk protection order bill.

“We still have some reservations about due process,” Baker said, referring to the provisions that would allow judges to temporarily remove any guns in a person’s possession if he or she decides the person is a risk to self or others.

Baker added that she doesn’t “have any intentions of running the bill” unless those concerns are addressed and there is enough support on the committee.

House Democrats seized on Kauffman’s limited appetite for gun control as a potential election issue for next year.

“We had the opportunity to take action on commonsense legislation that our communities want, but instead we considered bills that cater to special interests and won’t do anything to help us protect residents,” Rep. Tim Briggs, D-Montgomery County and the ranking Democrat on the House Judiciary Committee, said during a rally at the Capitol Wednesday.

“Thousands of Pennsylvanians die each year from gun violence, and we have to do something about it. If House Republicans refuse to lead, they should get out of the way.”

But the bottom line for this session appears to be this: If extreme risk protection order bills are to make any significant headway in the Pennsylvania over the next year, it’s probably going to be up to the state Senate to pass it first, and then hold it up as a priority – perhaps in conjunction with Democratic Gov. Tom Wolf – for its consideration in the House.

As of the end of this session week, it seemed way too early to know if those things could come about, though supporters vowed not to give up.

“There are a number of different paths a bill can take to the governor’s desk,” Rep. Todd Stephens, R-Montgomery County and the prime sponsor of the red flag bill in the House, said Wednesday. “And there’s a lot of session time left.”

Kauffman did hold votes Tuesday on a series of topics that have safely passed with heavy GOP support and the pro-gun lobby’s consent in the past, including some that have been undone through legal challenges. They included:

Both of those brought some debate.

Philadelphia, in recent times, has been one of the centers of gun crime in Pennsylvania.

Stiffer gun laws have been enacted by many of the state’s larger cities, including Philadelphia, Pittsburgh and Harrisburg, but they have rarely been successfully enforced because of the state’s primacy — recently reinforced by appellate courts — on gun laws.

“What works in Philly make not work in Perry County... but we should have the flexibility to allow our local electeds to decide what policy is best to serve the interests of those folks who are most affected” by gun violence, Rabb said.

The so-called pre-emption bill, proposed by Rep. Mark Keller, R-Perry County, seeks to discourage such place-by-place policy-making by holding the local governments who do it liable for court costs and attorney fees.

The other debate Tuesday came on Stephens’ effort to reinstate the state’s five-year mandatory minimum sentences for criminal convictions of violent crimes like rape, robbery and murder, when the defendant has used a gun.

Most of the state’s mandatory minimums were rubbed out by a 2015 Pennsylvania Supreme Court decision that found the statute required trial judges, instead of jurors, to make several key findings of fact. Stephens’ new version of the bill seeks to fix that problem.

Opponents of the bill argued mandatory minimums fly in the face of current criminal justice reform efforts, and they are disproportionately applied by prosecutors to African-Americans and other minorities.

Stephens said he’d be willing to address the latter concern by eliminating the prosecutors’ discretion to seek the mandatory minimums and make them apply automatically to all gun-crime defendants, but he was adamant that the policy will make Pennsylvanians safer.

He argued that should matter greatly to minority groups as well, noting that 63 percent of all murder-by-gunshot victims from 2013 through 2017 were non-white.

“There is no question that incapacitation works,” Stephens said. “There aren’t too many gun crimes committed in our state prisons. So while an individual who has already committed a violent crime or felony goes to state prison, the rest of us are safer for it.”

All of the bills that received committee action Tuesday must now be scheduled for votes by the full House.

Ed Mahon of PA Post contributed to this report.