MIFFLINBURG — More than 40 people attended a Buffalo Township Board of Supervisors meeting Monday night to hear about and discuss the possibility of enacting a Second Amendment Sanctuary ordinance at a future meeting. 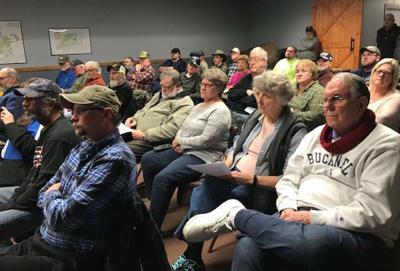 "We're here tonight to start the ball rolling on a movement that we hope others in this county will take notice of," said Township Chairman Joseph Wise. The ordinance would prevent the enforcement of certain gun control measures that violate the Second Amendment.

The language of the ordinance, Wise said, would first have to be run by solicitor Peter Matson, who was not in attendance at the meeting. After that, it would be presented to the public for viewing before a formal vote could be taken.

Right now, Wise said, the township would be posting online a proposed Union County ordinance similar to the one recently passed in Bradford County, the only one of its kind in the commonwealth to have been enacted.

The key language in the Bradford County ordinance, which Sean Walton, of New Columbia, hopes to use in Union County, is "Local governments have the legal authority to refuse to cooperate with state and federal firearm laws ... and proclaim a Second Amendment Sanctuary for law-abiding citizens."

Waltman brought the idea of a Second Amendment ordinance to the Township a few days ago. But he is hoping to hand out petitions to gather enough signatures to bring to Union County Commissioners for their consideration.

"That's the idea," he said. "To have a county-wide ordinance."

"What these ordinances do is protect gun owners' rights from future attempts to restrict ownership," Waltman said, "although the Second Amendment is supposed to. The ordinance would say, in effect, that the governing body would not use any of their resources, personnel, to enforce those unconstitutional laws.

"That's what we're trying to do in Union County," he continued. "Protect our rights."

The ordinance does not address previously passed gun laws.

No one in the audience disagreed with the concept of such an ordinance being enacted.

But Christian Soltysiak, executive director, CeasefirePa, said on Monday from Philadelphia that "such an ordinance would be putting residents at risk of gun violence."  She declined further comment until she knew more about the proposed ordinance.

Wise urged Union County residents to go to their municipalities and urge them "to get on board with this so that we can get our sanctuary and protect our rights. This meeting tonight is about starting a movement here in Buffalo Township. It has to start somewhere."

After adjournment, individuals from the audience signed petitions, even though the language for the future ordinance had not yet been examined by the township solicitor.