North Carolina Self-Defense: I aimed at the legs because I didn't wanna kill him: Chili's shooter claims self-defense :: 07/02/2020

FOREST CITY, N.C. (WLOS) — A man involved in a Forest City shooting is telling News 13 his side of the story.

Chili's shooter claims it was self-defense to protect his family

The shooting happened at the Chili’s off Sparks Crossing around 8 p.m. Saturday.

Byron Forney said he showed up to the restaurant to eat dinner with his sister and her boyfriend. He said when he arrived, things felt a little off.

“I see a group of people over there in the car of the parking lot when I pulled up. I didn’t know who they was,” Forney said.

He said, regardless, he decided to step inside the restaurant and meet up with his family.

Forney said a group of men outside were yelling at him, his sister and other customers.

“Talking about how are you gonna wear a mask when you’re sitting in there about to eat,” Forney recalled.

Forney said he and his sister decided to leave. He said as he was walking to his car, the group of people started up again.

“They kept on arguing, saying racial slurs and stuff,” Forney said. “The son had hollered the N word.”

“The son got mad. He said, ‘OK, I got something for you MF.’ And he ran to the car. He ran to the car, and, next thing you know, he was walking up on my sister, and I just shot,” Forney said.

Forney said he did it to protect himself and his family. 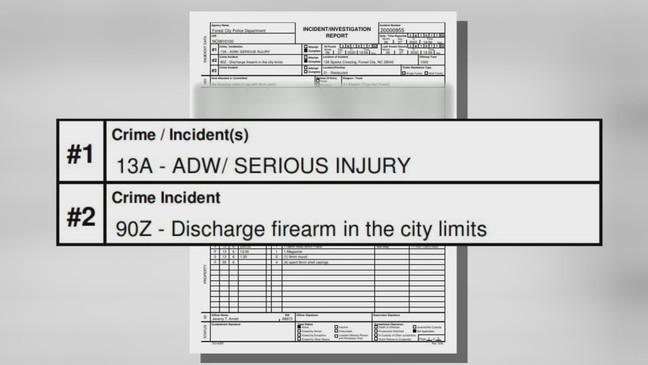 Byron Forney said Saturday's shooting at Chili's was done to protect himself and his family. (Photo credit: WLOS staff)

According to an incident report from Forest City Police, officers are investigating the incident as an assault with a deadly weapon and a discharge firearm in city limits.

A detective earlier this week said the victim had non-life threatening injuries.

He said it was important for him to share all of this for two reasons.

“I just wanna tell my side of the story because it’s the truth,” Forney said. “This is racism. You know, people gotta stop all this. It’s getting nobody nowhere.”

Forest City Police on Wednesday said it is still an open investigation.

Investigators have met with the district attorney about the case, but no charges have been filed at this time.