Ajay Dhingra drew the authorities’ focus after he sent an email asking former President George W. Bush to “send one of your boys to come murder me,” records show. 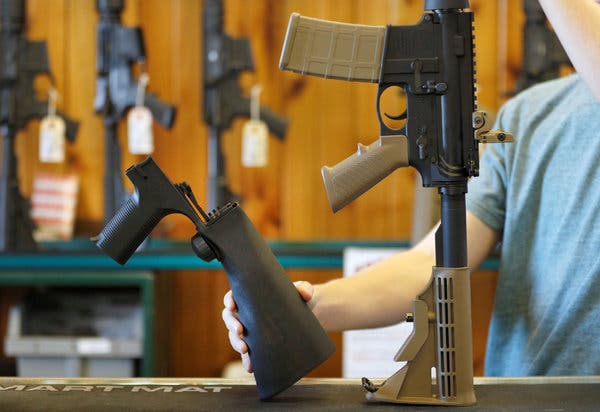 The authorities in Houston said Thursday that they had brought charges in what they believed to be the country’s first prosecution under a new ban on bump stocks, the attachments that enable semiautomatic rifles to fire in sustained, rapid bursts.

The ban, which went into effect in March, was ordered last year by the Trump administration following several mass shootings.

The suspect in the Houston case, Ajay Dhingra, 43, drew the authorities’ attention in August after he sent an email to the George W. Bush Presidential Center asking the former president to “send one of your boys to come murder me,” according to court records. “I want to die by the hands of a white Christian.”

Federal agents then searched Mr. Dhingra’s apartment and found a Slide Fire bump stock attached to a Colt AR-15 rifle, a Glock 9-millimeter pistol and hundreds of rounds of ammunition, according to court records.

Mr. Dhingra faces four felony gun charges, including possession of the bump stock, possession of firearms and ammunition by someone who had been committed to a mental institution, and two counts of making false statements about his mental health history when he bought the guns from Houston-area dealers.

David B. Adler, Mr. Dhingra’s lawyer, declined to comment on Thursday. Mr. Dhingra is being held in a federal detention center in Houston, prison records show.

A bump stock replaces a rifle’s standard stock, which is the part held against the shoulder. The stock “bumps” back and forth between the shooter’s shoulder and trigger finger, causing the rifle to rapidly fire again and again.

Interest in bump stocks surged after the mass shooting at a concert in Las Vegas in October 2017. The gunman had a dozen rifles outfitted with bump stocks and killed 58 people and wounded hundreds of others.

Lawmakers in both parties then expressed openness to banning the bump stocks.

President Trump announced the rule banning bump stocks after the February 2018 shooting at Marjory Stoneman Douglas High School in Parkland, Fla., that left 17 people dead. The gunman in the Parkland shooting did not use a bump stock.

Under the ban, the federal government redefined machine guns, which are illegal, to include bump stocks. Despite a legal challenge, the United States Supreme Court refused to block the regulation in March 2019, when the rule went into effect.

The United States Attorney’s Office in Houston said Thursday that after consulting with the Bureau of Alcohol, Tobacco, Firearms and Explosives, they believed Mr. Dhingra’s prosecution to be the first under the new ban. The bureau’s national office did not immediately respond to a request for comment on Thursday evening to confirm that.

Following the email to the George W. Bush Presidential Center, Mr. Dhingra was arrested and charged on Aug. 17, court records show. He was indicted on the four gun charges by a federal grand jury on Wednesday.

Mr. Dhingra had a concealed carry license, according to an affidavit filed in federal court.

Federal agents interviewed Mr. Dhingra’s mother on Aug. 16. She said that he had schizophrenia and that he had been committed to a mental health facility 14 years ago. But she said Mr. Dhingra believed he was “more intelligent than the doctors” and rejected their diagnosis, according to the affidavit.

Mr. Dhingra’s mother and brother told federal agents that Mr. Dhingra refuses to take his medication. The agents found bumper stickers on Mr. Dhingra’s car that said “My community of Houston Texas USA chose to bully me — a somewhat autistic person, who was molested and raped since the age of 8” and “White Christians are cowards. Put bullets in my head cowards.”

The agents then interviewed Mr. Dhingra at his apartment in Houston, according to the affidavit, and he told them he believed that people ridicule him and call him homosexual slurs when he leaves the apartment, the affidavit said.

Mr. Dhingra told agents that he believed he was autistic and not schizophrenic, and made several references to listening to a voice in his head, according to the affidavit.

He said he bought the two guns after the mass shooting at an Orlando, Fla., nightclub in June 2016 in which 49 people were killed and the Las Vegas shooting, the affidavit said.

Why Are Bump Stocks in the National Conversation?

Mihir Zaveri covers breaking news from New York. Before joining The Times in 2018 he was a reporter for The Houston Chronicle.